The NovaSeq 6000 System is enabling OIST researchers to sequence and study various ocean and land species. 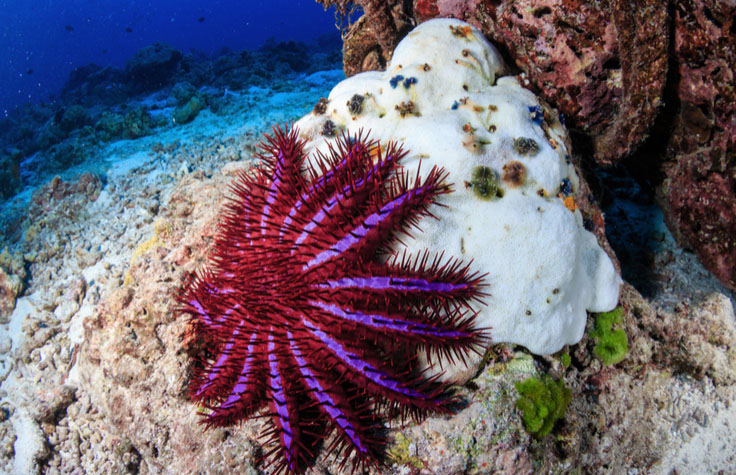 How many species exist on Earth? It’s a fundamental question that researchers have struggled to answer. While two million distinct species have already been cataloged, the world’s amazing diversity means it’s likely there are more plants, insects, and microbes that have yet to be discovered. Helping to identify, characterize, and catalog the diversity of species, on land and in the sea, is one of the goals of researchers at the Okinawa Institute of Science and Technology (OIST) on the island of Okinawa in Japan.

It is no small undertaking. Consider the ocean: given its vast size and depths, the National Oceanic and Atmospheric Administration (NOAA) believes that less than 10 percent of ocean species have been classified and cataloged to date.1 Using new methods, scientists now estimate that the world contains somewhere between one and six billion living species, one thousand—fold more than those already described in the scientific canon.2

Dr. Nana Arakaki is a manager and Dr. Ryo Koyanagi was formerly a research support specialist in the DNA Sequencing Section (SQC) at OIST in Okinawa, Japan.

Dr. Nana Arakaki is a manager in the DNA Sequencing Section (SQC) at OIST. The SQC team uses the high-throughput NovaSeq 6000 System to perform sequencing for evolutionary genomics studies of chordates and other marine life. As the core lab at OIST, the SQC team provides sequencing services to zoologists and biologists at OIST and other researchers throughout the world.

“Our services range from de novo sequencing, resequencing, RNA-Seq, ChIP-Seq, and amplicon sequencing,” Dr. Arakaki said. “In collaboration with different research units, we have supported studies on various marine invertebrates, including starfish, the acorn worm, the pearl oyster, octopus, and squid, as well as different seaweeds.”

Their focus on marine life isn’t by chance. OIST is home to Professor Noriyuki Satoh’s esteemed marine genomics laboratory. “Japan has a long tradition in the study of marine biology,” Professor Satoh said. “We have various marine stations around the nation and researchers have discovered a significant amount of information about the different organisms that live around them. Today, genome sequences of those organisms are being used by researchers to accelerate further study.”

Part of the OIST mission is to conduct research that can “contribute to the sustainable development of Okinawa.”3 To that end, Dr. Arakaki and her team are working on several projects that affect the Okinawan ecosystem and industries directly. “We are performing several de novo sequencing projects on organisms that are found near or on Okinawa island,” Dr. Arakaki said. “Some are important so that we can support their studies on the evolutionary history of animals. Others have more impact on the Okinawan economy.”

One of the laboratory’s major projects involved sequencing the genome of Acanthaster planci, better known as the crown-of-thorns starfish. Together with tropical cyclones, this predatory starfish species is thought to be one of the main causes of hard coral reef damage throughout the Pacific. 4,5 “The crown-of-thorns starfish species is the natural enemy of coral reefs,” said Dr. Ryo Koyanagi, formerly a research support specialist on the SQC team. “To help preserve coral reefs, it is important that we understand how and why they are so damaging. After studying the genome, we found that the population genetics of this starfish are quite interesting.”

Crown-of-thorns starfish feed on hard coral. During “outbreaks,” large numbers of the starfish amass on a single reef, leading to its destruction. Scientists had not known how or why such large numbers would aggregate in a single place. The next-generation sequencing (NGS) services provided by SQC enabled Professor Satoh and his colleagues to identify gene products that enable these starfish to communicate with one another, offering a new target for biocontrol strategies in the future.

"The lower cost of sequencing is attracting more OIST researchers to use our sequencing services, enabling them to study animal phyla from a molecular biology point of view.”

The SQC team has also sequenced the genomes of other coral species. “By looking at coral genomes, we can see why they might disappear suddenly in a wide area, perhaps because of temperature,” Dr. Koyanagi said. “Understanding the genetic background and other information that we gain from sequencing enables us to learn more about these organisms.”

OIST researchers have teamed with the SQC to make remarkable discoveries regarding the evolution of habu snake venom6; the photosynthetic properties of Symbiodinium, an important single-celled organism that helps keep marine ecosystems healthy;7 and the genomics of brown algae, an edible seaweed.8 Current studies are focused on sequencing local fish, seaweeds, terrestrial animals, and even Shikuwasa, a small citrus fruit native to the island.

“All these species are very special to our island,” Dr. Koyanagi explained. “They are part of our culture. Data about their genomes will help us understand these species and their evolutionary stories. Because they are cultivated in Okinawa, understanding their genomes is also important to the agricultural industry. The data will enable us to improve productivity, cultivation, and resistance against disease.”

Sequencing was once time- and labor-intensive. It took weeks to perform basic genome analysis. “Before NGS, our studies were performed using Sanger sequencing, which is only targeted for a limited number of genes,” Dr. Arakaki said. “Because of the technical limitations, there were many hypotheses that could not be tested.”

Dr. Arakaki believes that the NovaSeq 6000 System has made a positive difference in their work. The system significantly reduces their sequencing costs and offers greater flexibility and accuracy. Before the NovaSeq 6000 System, the sequencing projects that the team performs now would have been unthinkable, and the costs and time involved prohibitive.

“With the NovaSeq 6000 System, the throughput is high and analysis is very sophisticated,” Dr. Koyanagi said. “Instead of getting 20 megabases, we can easily finish 400 megabases of the genome. Our fast sequencing turnaround has enabled Professor Satoh to complete projects without having to collaborate with other specialists. What would take years using Sanger sequencing can now be performed in days with NGS.”

Yet, the most important feature of the NovaSeq 6000 System for the SQC team is its high data quality. The system enables them to perform analyses with higher resolution, without the need for reference genome sequencing, and with smaller amounts of data. “We started using the NovaSeq 6000 System to reduce our sequencing costs so that we could run more samples and stay within our budget,” Dr. Arakaki said. “Yet, it has so many other advantages. The NovaSeq 6000 System is an invaluable tool in my work. It’s amazing to be involved in such important projects, doing my part to help researchers achieve their goals.”

Current SQC studies include sequencing the cobia, a fish found in Okinawa and elsewhere in the Pacific Ocean. They plan to continue sequencing various marine organisms, as well as terrestrial species native to Okinawa, doing their part to help catalog new and interesting species in Japan and beyond.

“The NovaSeq 6000 System is transforming research at OIST,” Dr. Koyanagi said. “Its high throughput enables us to analyze data quickly. The lower cost of sequencing is attracting more OIST researchers to use our sequencing services, enabling them to study animal phyla from a molecular biology point of view.”

“We are very excited about the role that the NovaSeq 6000 System will play in future aquaculture studies,” Dr. Arakaki added. “There are so many possibilities for new discoveries because this area is still largely unexplored.”

Dr. Koyanagi agrees. “There are still so many species to be sequenced and so much more to explore here and in other parts of the world,” Dr. Koyanagi said. “It’s very exciting to hear about what our researchers have learned from the sequencing data that we provide. The NovaSeq 6000 System always seems to find something unexpected.”

See how OIST is expanding aquaculture with NGS:

Learn more about the system mentioned in this article: